Where to Stay And Things To See In Monterey

If driving down California’s famous coastal Highway 1 is on your must-do list, then Monterey is as good a final destination as any when heading south from San Francisco. Monterey is about 115 miles from its sister city, making it close enough to incorporate into a round-trip itinerary if your flights are into and out of San Francisco during a weeklong vacation.

Even if you’ve never heard of the city of Monterey, you’ve probably at least heard of Monterey Jack cheese, which originated here and was made popular when it was mass-marketed by a man named David Jack during the 1800s. There are a lot of variations on Monterey Jack cheese today, and they range from mild to spicy — just like the offerings in the city itself.

Monterey was actually the region’s capital city from 1777 to 1849, when what is now northern California was controlled by Spain and Mexico. The city boasts a lot of America’s “firsts,” including its first theater, public library, and printing press. Today, it is best known for the Monterey Bay Aquarium in the northern part of the city, but the downtown area has plenty to offer tourists as well, including a fine art museum and the bustling Fisherman’s Wharf.

Annual events draw thousands of tourists to the city of Monterey. One of the longest-running and most popular is the Monterey Bay Blues Festival, held each June at the Monterey Fairgrounds.  Every July, you can enjoy the Scottish Games and Celtic Festival (montereyscotsgames.com) and the Obon Festival, which features Japanese food and exhibits. Also don’t miss the Monterey Jazz Festival, held for a half-century each September (montereyjazzfestival.org).

Working trawlers still call Wharf 2 home at Monterey’s Fisherman’s Wharf, so it’s a great place to explore if you want to combine touristy restaurants and shops with a bit of real-life fisheries scenery.

Lots of on-the-water Monterey Bay activities launch from Fisherman’s Wharf, including glass-bottom boat tours, whale-watching tours, and deep-sea fishing boats. Even so, eating is the primary activity here; it’s hard to get seafood any fresher. You’ll find all kinds of variety, from places called Crabby Jim’s with standard favorites to spots known as Cabo’s Wild Mexican Seafood, where sweet mole is a favorite ingredient.

Fisherman’s Wharf has so much to offer that it has its own Web site, montereywharf.com, for directions, a calendar of upcoming events, and links to shops, restaurants, and services.

If you’re a student of military history or a history buff in general, then you won’t want to miss a trip to the Presidio of Monterey. Under U.S. control since the early 1900s, the Presidio has been around since the 1700s, when Spain dominated the area. The Presidio was declared inactive in 1944, but it did serve as a staging and holding area for troops preparing to occupy Japan during World War II. Today, the Presidio’s role is to provide base support services that help U.S. forces become mission-ready.

As you might imagine, the Maritime Museum of Monterey focuses on local maritime history. It opened in 1992 and houses more than 50,000 photographs, including an impressive collection of ship photography. Seven exhibit areas house permanent and rotating exhibits, and some are interactive to keep younger travelers engaged. The Monterey History and Art Association oversees this museum, which you can learn more about at montereyhistory.org.

The Monterey Museum of Art offers a rotating schedule of hands-on workshops and other activities that are designed to help the whole family better relate to the works in the permanent collection and rotating exhibits.

The city of Monterey actually shares this beach with the town of Seaside to the south. It’s a favorite for fishermen and scuba divers, thanks to the abundance of aquatic life below Monterey Bay’s surface. The beach is flat, which attracts volleyball players and kite-flyers — an excellent way to spend an afternoon outdoors following a morning of museum tours downtown. For directions and details, go to parks.ca.gov.

The Monterey Museum of Art is a repository of American art, particularly works by Monterey Bay and West Coast artists, including the world-famous photographer Ansel Adams. Paintings, photography, and contemporary art fill the permanent collection, which is enhanced by lectures, seminars, and rotating exhibitions year-round.

Hours are 11 A.M. until 5 P.M. Wednesday through Saturday, and Sunday from 1 P.M. till 4 P.M. The museum is closed Monday and Tuesday. Adult admission is $5, and kids younger than twelve can enter for free. Military personnel pay a discounted admission fee of $2.50.

Though the National Steinbeck Center is a short, seventeen-mile drive away in the town of Salinas, most tourists incorporate it into their itinerary when planning to visit Monterey. You know Steinbeck’s books even if you haven’t read them, from East of Eden to The Grapes of Wrath and Of Mice and Men. At the museum, these titles and more come alive through interactive exhibits and themed theaters.

Steinbeck was born in Salinas and lived there until his college years, when he attended Stanford University to the city’s north. He left California for New York in his twenties but returned after failing to get any of his writings published. Thus, you can imagine the love this “hometown crowd” has for its native son, who went on to prove the critics wrong with bestsellers and even a Nobel Prize for Literature. Each August, the center sponsors a Steinbeck Festival that includes films, speakers, panels, theater, and tours that celebrate the noted author. Learn more at steinbeck.org. 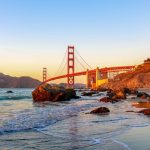 Top Attractions in San Francisco Northern California‘s best-known metropolis was once known as the “City of Flags” — a fitting moniker given the diversity of ... Read more

The Pacific Ocean, which delineates northern California’s western border, is one of the most spectacular oceans in the world. The Golden State isn’t shy about ... Read more

Gilroy, California is located about an hour and a half south of San Francisco and about 20 miles north of San Jose. It is probably ... Read more

All right, so not every kid wants to spend a week’s worth of vacation time checking out educational exhibits. For some families, theme vacations mean ... Read more