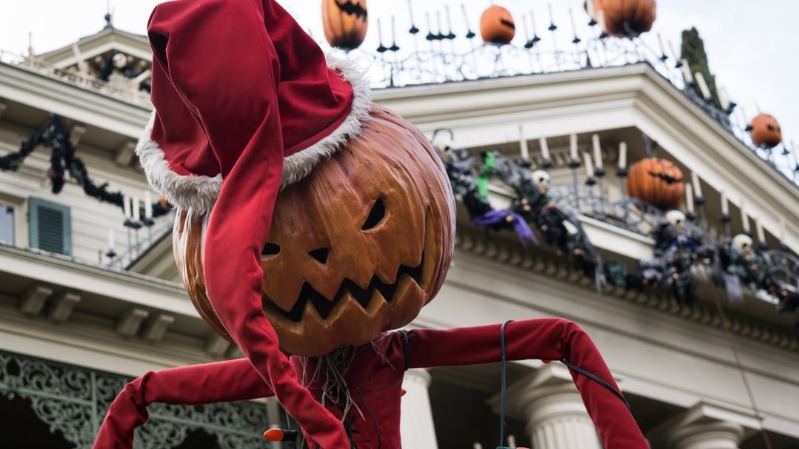 Disneyland during the Christmas holiday season is magical enough to warm the most cynical of hearts. It’s hard to stay jaded when surrounded with delighted children, fully committed character actors, twinkling lights, and happy music of traditional Christmas melodies. Even though Southern California could never be the snow-covered winter wonderland of Burl Ives’ stylized Christmas season, Disneyland brings that most traditional and wondrous imagining of Christmastime to life, ever year, and faithfully so. As a reformed yet still somewhat sassy New Yorker, I find myself completely swept up in the magic of a Disneyland Christmas holiday every year. It’s easy. It’s fun. And there’s no better feeling.

A Disneyland holiday family trip is often the highlight of the year for theme park lovers. Those of us in Southern California are somewhat spoiled by our proximity to Disneyland, but it’s nevertheless always an extremely exciting day or weekend for anyone with children. To spend time in Disneyland during the winter holiday season is to be transported to another time and place — that’s how good the Disney Imagineers are.

Disney theme parks are the pinnacle of a particular type of family vacation; one that is more child-centered than most, with whimsy, magic, and princess sightings. Sure, a family vacation to Disneyland will not expose your children to a cultural experience, but many, many people prefer the absolute treat that is a Disney family vacation. And there is no greater time to experience Disneyland’s magic than during the Christmas holiday season. Christmas break at Disneyland — everything about it screams Disney.

You and your children are transported to an idealized version of Christmastime the moment you and your kids step onto the Disneyland property. That is to say, the high-tech gizmos and gadgets that simplify our lives and are landmarks of our modern times are abandoned, with Currier & Ives Christmas decor that harkens back to simpler times reigning supreme. Wreaths adorn most lampposts, Main Street is festooned with old-fashioned garlands, ribbons, and bows, giant Christmas trees can be found at both Disneyland and California Adventure, there are actual reindeer moseying around in a fencing-in area of Big Thunder Ranch, and, of course, central casting does its finest to find a perfect Santa Claus, his lap ready for kids and photo opportunities.

Most rides are done up with Christmas decor, there is a great Santa Claus ready for photos with kids on his lap, and the cooler winter air means that kids don’t get overheated, so they last longer and stay happier all day. Not that taking a break to enjoy a corn dog or turkey leg isn’t unavoidable! We had corn dogs for lunch this time around. Then it was back to the fun.

The Haunted Mansion and It’s a Small World are without a doubt the two best Disney theme park rides for admiring Christmas at Disneyland. Sure, you could argue that the Haunted Mansion is more appropriate for Halloween in the Los Angeles area (and it is a great Halloween stop), but Jack Skellington from Nightmare Before Christmas basically owns the Haunted Mansion, and this long-limbed personality does his best to offer his guests a Christmastime they deserve, with the gothic twist true to his personality.

Don’t miss the It’s a Small World ride at Christmas; more than any other Disneyland ride, it’s changed to reflect the holiday. I saw some older teens pile into the ride ahead of us, and expected tons of snarky comments. Instead, the ride quieted them, and they spent the entire time pointing and smiling. It’s a sentimental experience, apparently, to go on a ride meant for the younger children at the theme park. I appreciated it, too.

It’s a Small World is transformed for Disneyland at Christmas, with all of the little spinning people singing a few Christmas songs in addition to their eponymous song – you know, the one that you can’t get out of your head for hours after you end up leaving Disneyland? Leave your skepticism at the door: the completely unironic, honest ride celebrates Christmas all over the world, and it’s impossible not to be swept up in the attraction’s spirit and joy.

Check out the American Southwest, China, Australia, Hawaii, Mexico, and other destinations and countries featured in It’s a Small World, as they offer glimpses of their respective cultures amid twinkling Christmas lights. Even the teenagers and young adults I saw on the ride couldn’t help but feel sentimental and nostalgic.

Of course, a Christmas holiday vacation at Disneyland isn’t limited to the most seasonally appropriate rides. Make the most of your family trip by using Fastpasses — the Matterhorn is fun, as is Thunder Mountain, and they’re both popular enough that using fastpasses for both will significantly reduce your wait-in-line time.

And then there are the parades. Disneyland (and its Orlando counterpart, Walt Disney World) are well-known for their fantastic, old-fashioned parades. Of course, Christmas holiday parades are reworked to be appropriately seasonal, and the children’s enthusiasm is contagious. It’s so much fun to see little kids point and squeal at their favorite characters and get a wave back from, say, Woody the Cowboy, Goofy, or one of the grinning, swirling princesses.

Kids love the Disneyland parades, and for the Christmas holidays, the parades are remade to the theme of the season. The grown-ups, too, can’t help but get caught up in the excitement of the experience.

California Adventure completed and opened Buena Vista Street and Cars Land . The old-timey, optimistic feel of Buena Vista Street, which harkens back to the 1920s and the sense of California as a land of promise, fits the Christmas season at Disneyland to a tee. And Cars Land is similarly optimistic and hopeful, this time recollecting the open roads, Route 66, and the American Southwest of the 1950′s. Both times were remarkably optimistic periods in our nation’s history, and this is reflected so well in the imagineering of both parts of California Adventure. The Disneyland Christmas holiday, as celebrated in both parts of the theme park, is better than ever. It feels like the perfect match of theme park and holiday season.

Anyone who has been to Southern California for a Disneyland Christmas holiday season before, and loved it, should try to plan a return visit. The California Adventure side of the theme park is so fresh, and so clearly aligned with the Disney philosophy, that experiencing it during Christmas will bring a new sense of joy and excitement to its visitors. And it’s so seeped in nostalgia that it may also make guests wistful for eras that they don’t even necessarily remember – the 1920′s along Buena Vista Street, and the 1050s in Cars Land.

Disneyland’s California Adventure new has seasonal decor (wreaths, strings of lights, etc) throughout the theme park; especially of note are all the bright orange Christmas holiday decorations around the Cone Zone, which are where buildings shaped like oversized orange traffic cones have food kiosks within them. By the way, I don’t think the Cozy Cone Motel area is literally called the Cone Zone…but it should be! The orange tinsel, wreaths and lights are vivid, nontraditional Christmas colors to be sure. it works, though. You’ll have to come to Disneyland and see for yourself.

There are other new Disneyland Christmas holiday season attractions in California Adventure: it’s not just orange tinsel in the Cone Zone.

Now, across the theme park at Disneyland, there are still the amazing seasonally themed parades, and the It’s a Small World kiddie ride is bedecked, as usual, in the most festive manner. Disneyland always does Christmas right. This year, though, pay special attention to California Adventure’s part in the Disneyland Christmas holiday. It’s a wonderful addition to Disneyland’s celebration of the Christmas season.

Disneyland during the winter holiday season is a great experience. Christmas in Anaheim may not be snowy, but the joy of the holidays is in full effect at Disneyland.

Disneyland is among the most popular tourist destinations in all of California. It’s frequently crowded with happy traveling families who have saved up all year for this one magical vacation. Summers in Southern California can be unbearably hot, causing children to become irritable (yeah, their parents, too). Disneyland is cooler, even brisk, during the Christmas holiday season, making it ideal for running from attraction to attraction all day.

The Disney Imagineers work hard to make the entire theme park evocative of a more innocent era, which, combined with the mild weather, fewer cranky crowds, and the sheer delight on our children’s faces, makes Christmas a strongly recommended time of year for a family vacation at Disneyland. To paraphrase, may your days be joyous and bright, and may your next Christmas be spent at Disneyland.

Enough said. Well, almost, a lot of people with children will visit “The happiest place on earth”. I, am not a huge fan. But, I ... Read more