Coronado Island offers honeymoon couples and other romantics a great beach experience right off the coast of San Diego. The perfect southern California weather, with an average temperature of 70 degrees and low humidity, makes it possible to enjoy the destination in any season.

Stretching for one and one half miles, picture-perfect Coronado Beach was rated the #1 beach in America in 2012 by Dr. Beach. No wonder that on any given day you will find bridal parties posing for photos along the soft white sand.

The fabulous Hotel Del Coronado is located right on the beach. An historic landmark with turrets and flags fluttering, it’s the largest wooden hotel in America.

Even visitors to Coronado staying elsewhere flock to the stately Hotel del Coronado (check rates) to see the property (known to many through the classic Marilyn Monroe/Tony Curtis/Jack Lemmon film Some Like It Hot) and to enjoy a meal and browse the shops.

All that water surrounding Coronado allows for lots of water activities. The mild surf makes it a good place for beginning surfers. Sailboats, powerboats, jet skis and kayaks can be rented.

On a honeymoon or romantic trip, spring for a gondola ride through the Coronado Cays canals. Our gondolier sang arias as we sipped champagne and ate chocolate-covered strawberries.

The Gondola Company is located at Loews Coronado Bay Resort at the southern end of Coronado. We had massages at the hotel’s Sea Spa before the gondola cruise and then savored a Mediterranean-inspired dinner at their restaurant Mistral. Overlooking the Pacific, the large picture windows provide a romantic setting to watch the sunset.

Orange Avenue, Coronado’s main street, is lined with shops, theaters and restaurants. Lamb’s Players Theater, in the middle of town, houses an excellent professional company that presents five plays from January through November, plus special performances at Christmas. A wacky British mistaken-identity comedy was performed the night we attended.

Various tours of Coronado include a heritage walk that begins at the Museum of History and Art. There are 15 miles of paths for strolling, jogging, rollerblading and biking on Coronado and a municipal golf course.

We stayed just a couple of blocks off Orange Avenue and the beach at 1906 Lodge, which has won accolades from Trip Advisor as the #1 place to stay in Coronado.

Each of the 1906 Lodge’s 17 rooms is unique and designed to honor Coronado’s colorful history. Ours was “Tea Garden,” reflecting the fact that there once stood a Japanese Tea Garden across the street. The oddly named “Tent City” pays homage to the hundreds of tents that provided lodging for vacationers on the Coronado beach from 1900 to 1939. “Author’s Study” honors writers such as L. Frank Baum. The scribe who penned The Wizard of Oz enjoyed staying on the island.

The décor of each room at the the 1906 Lodge is wildly different but all have a clock radio pre-set to a variety of stations such as country, soft rock and oldies, with MP3 and CD capabilities. Ten rooms have in-room spa tubs and a fireplace. All have wi-fi.

The Lodge’s Proposal Package features a customized “message in a bottle” bearing your sentiments to a loved one, plus a single red rose and chilled champagne. The Romance Package consists of champagne, the rose and chocolates.

Parking can be a problem in Coronado, so a big bonus is the Lodge’s underground parking garage that is free to guests. From the 1906 Lodge, it is a two-block walk to Coronado Beach. Beach chairs and umbrellas are available on loan from the hotel.

For those who want to spend time off the beach, the city of San Diego is just two miles away, across the sweeping San Diego and Coronado Bay Bridge with easy access to Seaport Village, USS Midway, and the Maritime Museum along the waterfront.

Those without cars can explore San Diego attractions through several tour companies (browse San Diego tours) operating on the island. Public transportation drops off at the center of San Diego’s main waterfront attractions.

Travel Channel named Coronado Beach one of the best, citing its surroundings, with Hotel del Coronado behind and downtown Coronado nearby.

The most popular part of Coronado Beach is around the hotel. North Coronado Beach is less busy, but further from restrooms and noisier, with airplanes landing overhead. Just north of the hotel, you’ll find a clump of small sand dunes – look closely and you’ll see that they spell C-O-R-O-N-A-D-O.

Where Coronado Beach is Located

Coronado Beach is on Coronado Island, across the bay from downtown San Diego. From I-5, take the Coronado Bay Bridge exit and go over the bridge. Turn left at the first traffic light onto Orange Avenue.

You will find some street parking near the Hotel del Coronado and an underground parking garage to the right of Orange Avenue just before you get to the hotel. There’s also a public lot just before the high-rise apartment buildings. Don’t let the signs here fool you. They make it look like it’s a private lot, but it isn’t. 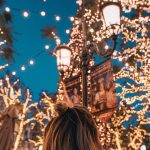 Spending the Christmas holiday season in San Diego has its benefits: the weather is usually mild – in fact December is one of the sunniest ... Read more

San Diego Halloween Events Who says Halloween has to last only one day?  Those costumes are too cute to wear only once.  Here are some ... Read more